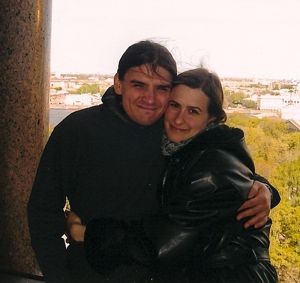 When Don was asked, “Why do you write songs? What are your goals?” He responded simply by saying, “I hope my songs could help people.” Don aspired to be a professional songwriter. He was extremely prolific. Witty and wise, his ability to precisely articulate the human emotion was immense and refined. Through completing the concept albums he was working on at the time of his death, I have been given the great honor to share and preserve his legacy.

Don would often say his family was his biggest inspiration…however, he was inspired by so much and so many. He loved Joni Mitchell, Django Reinhardt, Jim Croce, the Police, King Crimson, Neil Young, Harry Nilsson, John Lennon, as well as the classical masters such as Brahms, Mahler, Beethoven, Shostakovich, Rachmaninoff…this list could go on forever.

Don spent the last years of his life in Ocean Beach, California although he was a native of the Binghamton area, hailing originally from Owego, NY. His grandfather Bob Truesdail and father Dan Truesdail passed on the family tradition of singing and songwriting. Don had played guitar since a small child and grew up to his father singing original songs as well as those by Hoyt Axton, Kris Kristofferson and many other classic songwriters. He also sang in the choir and played low brass and bass guitar in school. Don’s high school music teachers, Dan Fabricious and Janet Parker became his musical mentors. This is where Don was first introduced to jazz and bass players like Stanley Clarke and John Pattitucci.

Don played almost every genre imaginable…from punk to Greek Folk music…he was very versatile. He played with groups such as Madness with no Method, Android’s Sister, Crystalline and Prism. He continued to study and became the first in his family to attend college. He started studying double bass under Richard Elliot Thomas. He achieved his Bachelor’s Degree in Music Education from SUNY Fredonia under the bass tutelage of Dr. Harry Jacobson. He then went on to complete his Masters in Contra Bass performance at SUNY Binghamton under the instruction of Stephen Stalker. To further prepare for the completion of his masters, he had the rare opportunity in 2006 to study under Rostaslav Alexandrovich Jakaliev, the principal bassist of the Bolshoi Zal Philharmonic and head of the bass department at the Rhimsky-Korsakov Music Conservatory of St. Petersburg, Russia.

He was a dedicated teacher and was inspired to provide the same mentorship to children that he received as a growing musician. Despite his busy schedule, he never gave up on continually performing and creating. He developed four conecept albums of songs during the last 4 years of his life, “Hello Nancy…Dasvidanya Bingoland,” “Enervator,” “Schmooze Tales,” and “Adaptations Arcana Americana-Resetting Forgotten Gems”. Three of these albums have been preserved and can be found here on the truesdailstudio website. During this time, he also performed regularly with several local San Diegan artists such as Amadou Fall, Farhad Bahrami, Joe Khoroosi, Jefferson Jay, Jr. Foss and Misha Borisovsky.

Don was tragically killed on January 13th, 2009 in an accident on the I-5 South on his way to work. His spirit is very strong in the Ocean Beach community and in all communities that keep him alive…he is greatly loved and missed by so many. The Truesdail Studio continues to honor Don’s name and much of what he stood for: Music Education, Connection and Passion. Thank you for taking the time to read this. Please e-mail me at truesdailstudio@gmail.com with any questions regarding lessons, special event performers, and/or Don’s albums found on this site.